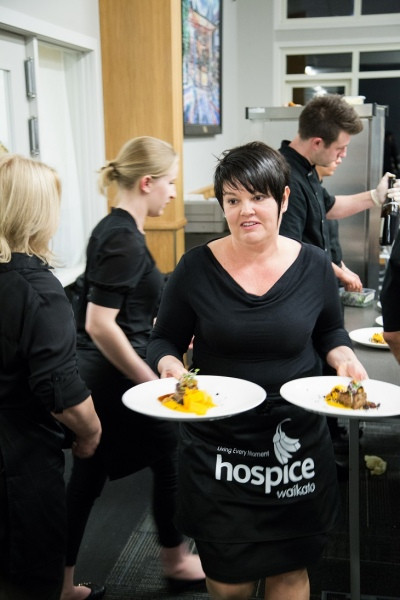 Hamilton Central Rotary Club held its annual Chef's Night Out fundraiser earlier this month for Hospice Waikato as the main beneficiary, and Volunteering Waikato team members stepped up to volunteer for the event. It was an evening filled with fantastic food prepared by some of Hamilton's top Chefs, coupled with velvety wine to celebrate an even sweeter ending. A staggering $16,000 was raised on the night for Hospice, a contribution from the community that is of great value to the beneficiary.

Hospice Waikato is one of Volunteering Waikato's member organisations, with a progressive number of volunteers dedicating their time and efforts to enhancing patient care, as well as to help alleviate the stress demand on the Hospice staff. Volunteers are involved in a number of different services varying from Hospice shop assistance, to providing bereavement and family support, all the way through to simple gardening. Help is certainly welcomed in all forms.

Karen Mansfield, Manager of Volunteer Services at Hospice Waikato writes, 'We wouldn't be able to achieve what we do without the support of individuals or groups such as Volunteering Waikato. The team there are enthusiastic and are just superstars! I love working with them.'

Lorraine Hooper, Volunteer co-ordinator at Volunteering Waikato, was among the many individuals that came out in support of the event to volunteer both her time and efforts. ‘Spending time with colleagues outside the workplace was a lot of fun. The Chefs Night Out is a great event where we work incredibly hard, but we go home knowing how much money was raised on the night and feeling very satisfied that we were part of making the event a success.'

During the past few years Volunteering Waikato has experienced rapid growth in both volunteer numbers and reach into the community, and they have increased the number of projects that they themselves volunteer for as a team. Their community contribution and support of the volunteer sector are a true testament of an organisation that can both walk the walk and talk the talk.