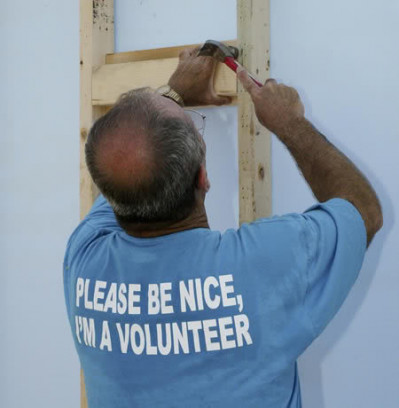 When you work with volunteers you get to meet some fabulous individuals who enrich your life with their many and diverse personalities, viewpoints, and life stories. I want to tell you about George whom I have known for many years now. George moved to Hamilton 8 years ago from Christchurch with his wife Sally. They had become quite nervous living in a city that was constantly shaking and although their home had been repaired after the earthquake, it was never quite the same. George said the heart had gone out of it.

The decision for George and Sally to move to Hamilton was a big one, but they wanted to be close to their daughter – and although she was working full time and busy with family – they welcomed the possibility of being more involved in their grandchildren’s lives.

Sadly, not long after moving, Sally unexpectedly died – leaving George alone in a city with few friends and no real networks to connect to. When I first met George to interview him for a volunteer role, he said he was watching a lot of television, was lonely and couldn’t get motivated to do things anymore. He said his days without a purpose were dragging – and mentioned he was starting to forget things – like whether he had showered that morning or not. He had to go and feel the bathmat to see if it was wet - his way of checking up on himself.

George came into our organisation as a volunteer, one day a week - but very soon was asking if he could do another. Six months later he took up an additional role - something quite different that we both thought he might enjoy. George was a fabulous volunteer for us – he arrived on time, was perfectly presented, worked hard, and got on well with everyone. The teams he worked with were social and often caught up after their shift to have lunch somewhere - to celebrate someone’s birthday, a wedding anniversary - or just for the sake of it. George started growing tomatoes and sharing them with his fellow volunteers – he gained quite a reputation as a supreme tomato grower! He was smiling more, was introduced to golf croquet by another volunteer and began to attend education seminars. I guess you could say that over several years, George found himself again.

I bumped into George’s daughter a while ago. She mentioned that his volunteer role had saved his life – the old George had come back – his mental health had improved, his cognitive functioning got back to where it had been , he was smiling more and enjoying life. It seemed the simple act of volunteering had given George the lifeline and sense of purpose he needed.

December the 5th is International Volunteer Day – a day when we acknowledge volunteers all around the world – a day when we recognise the contribution they make to our communities. There are many Georges, and Georginas, around – and without them our communities would be less well off. Volunteering is a mutual activity – those that volunteer benefit – and in return our communities benefit. People are living healthier, better lives, struggling less, having fun, surviving better – because of volunteers. In return, volunteers are healthier, happier, better connected, more experienced and knowledgeable and generally have a greater sense of purpose.

In an emergency, people turn up to volunteer and help - often this is spontaneous or short term to fill an urgent need. During Lockdown many people wanted to help others but were hamstrung by circumstances that limited what they could do. This desire to help has continued and created a surge in volunteering that appears ongoing. Volunteering Waikato is working hard to link people to opportunities where they can use existing skills or grow some new ones – where they will do something meaningful and impactful – where they will help shape a new future for themselves and others. If you are a volunteer and reading this – thank you! If you are thinking about volunteering –act now and find something you love doing at www.volunteeringwaikato.org.nz